Disenchantment is the animated TV series brought to us by Matt Groening, the creator of The Simpsons and Futurama. While different from its predecessors, this show still has the witty and dark humor we know and love! Not to mention some of the same great voice actors. Grab your bucket of beer, get some snake root, and enjoy this Disenchantment drinking game!

Who’s Who in Disenchantment?

Finish your drink for every…

We hope this drinking game made you happier than Oona on snakeroot! For more fun, check out our full list of TV show drinking games here.

Solar Opposites Season 2: Everything We Know So Far 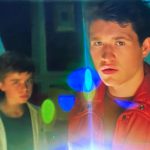