Fry, an unambitious pizza delivery boy, accidently gets cryogenically frozen on New Year’s Eve 1999. He wakes up a thousand years later not recognizing anyone or anything, but stumbles into a job not too different from his old one. Here he befriends a one-eyed mutant space captain, a churlish robot, a senile mad scientist who happens to be his own descendent, a Jamaican bureaucrat, a PhD student from Mars, and a lobster doctor. And somehow, he finds that he fits in much better with this futuristic motley crew than he ever did in his own time period!

This animated cult classic’s hilarity, well-aimed references, and subtle brilliance have captivated audiences for over 20 years. It’s a rare show that remains just as fantastic in its last episodes as it was in its early ones. It’ll make you laugh, it’ll make you cry (nobody mention Seymour, okay?), but most importantly, we’re here to make you drink! Below is a fun Futurama drink recommendation as well as rules for a Futurama drinking game.

If you’ve watched Futurama, you’re probably familiar with Fry’s favorite soda, Slurm. You may also have seen the episode that explains where Slurm comes from, but if you haven’t, we won’t spoil it for you. Just know that the way we suggest making it is a tad more appetizing that the way it’s actually made! The Slurm in Futurama is regular ol’ non-alcoholic soda, but there’s no reason you can’t spice it up a bit. For an authentic looking Futurama soda, we suggest:

If you want to get really authentic, you can print off a homemade Slurm label from this website. And of course, feel free to sub in whatever your favorite alcohol or clear mixer happens to be.

Be sure to check out the rest of our TV show drinking games! And if you’re into more animated sitcoms, we’ve got a list for that too. 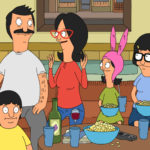 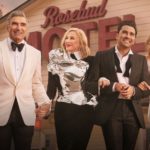