Solar Opposites is the hilarious animated show brought to us by Justin Roiland, the creator of Rick and Morty, as well as Mike McMahan. Let’s be honest: if you haven’t seen the show, you’re going to binge the whole thing, and if you have seen it, you’re probably going to binge it again. Keep this Solar Opposites drinking game handy because its been renewed for a third season!

As always, drink responsibly, hydrate, and keep your gooblers in check! And if you want to spice up your next Solar Opposites drinking game, consider having delicious craft beer delivered to your doorstop. Or send your friends some craft beer. You won’t even need to pour alien nanobots into their water supply to make them like you.

Solar Opposites has been renewed for both a second and third season! We’re very much looking forward to their release.

Hulu released stats to show 40% of people who started watching the show at its release binge watched all episodes within 2 days of its release. It was Hulu’s most watched premier of an original comedy.

Justin Roiland said they added the Pupa as a spoof of what primetime show families look like – “that way we can make it look as relatable and familiar as we possibly can.” Mike McMahan also said some of the inspiration came from the fact that he had a baby at the time, and realized  “you both love your baby and fear it, you’re scared of it and confused by it at all times.” The Pupa was so beloved that a lot of Pupa-centric merchandise came out upon release of the show.

The creators took inspiration from several movies and TV series for “The Wall” segments – including Escape from New York, Mad Max, War of the Roses, Game of Thrones, and Lord of the Rings, as well as novels Riverworld and Wool. At the moment, they have plans for The Wall going through at least season 4.

We know it can be tough to keep track of all the drinking game rules when you’re watching a TV show. So rather than each person trying to remember all 16 rules, we’ve conveniently divided them into 2 player sheets. If you’re playing with another person, send them this link and you can each watch out for just 8 different rules. 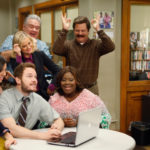