Snowpiercer is an HBO TV series based on a movie of the same title. Like in the movie, the world has become an icy wasteland after scientists accidentally froze everything in an effort to combat climate change. Now the world’s last remaining humans circle the world in a perpetually moving train. And this train is certainly no Polar Express! Secrets and depravity abound on the Snowpiercer. Grab your drink and check out the full list of Snowpiercer drinking game rules.

Drink 1 sip any time someone says…

Finish you drink when… 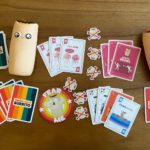 Be The Best Traveling Bartender With These Portable Cocktail Bar Sets!