If we lived in the Good Place, we’d have Janet bringing us cocktails all day long for this Good Place drinking game. How about a molotov cocktail inspired by Jason? Not a fiery explosion kind, but a fiery tasty kind!

For other great TV show drinking games, check out our full list here! And if you love Ted Danson as Michael, you may also love him in his new show, Mr. Mayor.

Best Beer Jigsaw Puzzles (That Are Actually In Stock) 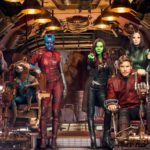 Guardians of the Galaxy 2 Drinking Game