Waterworld (1995) is a dystopian movie set in the future after the polar ice caps have melted. The world is covered in water, and the people have adapted in some crazy interesting ways. Everyone wants to find their way to dry land, but it seems only one little girl might have the answer. This movie has got action, thrills, romance, mystery – what more could you want! Grab yourself a drink (and some water, of course) and enjoy this Waterworld drinking game.

Be sure to check out the rest of our movie drinking games here!

When it came out, Waterworld was the most expensive movie to have ever been produced (at a total cost of $235 million). That record has since been broken many times, specifically by the Pirates of the Carribean, Avengers, and Star Wars franchises.

The map on Enola’s back shows actual coordinates for Mount Everest. As this is the highest point on the earth, it makes sense that it would be the one remaining spot of dry land in this extreme flooding situation.

That floating city was real. It weighed over 2,000,000 pounds and cost $22 million to create. It was built off of Hawaii, where the winds would often blow it around, messing up shots. They also had to shut down filming several times due to hurricane threats.

Many people, from the main characters to stunt doubles, almost died while filming Waterworld due to near-drowning or boat accidents.

Other contenders for the Deacon were Gary Busey, Gary Oldman, Samuel L. Jackson, and Jack Nicholson, but they all either turned down the role or were too expensive to bring on. 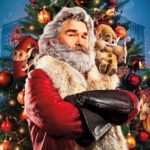 Christmas Chronicles Drinking Games: Rules for the Original and Sequel