Adam Sandler doesn’t disappoint in this recent film, released on Netflix in early October 2020. Hubie Halloween has an all-star cast, including Kevin James, Julie Bowen, Steve Buscemi, Maya Rudolph, and Kenan Thompson – ingredients for a pretty great movie. With all of the quirky characters and funny situations, this movie is just begging for a drinking game. So get out your thermos, pour yourself a drink, and enjoy this Hubie Halloween drinking game!

Finish your drink when…

Need your own boner donor shirt? Check out all of the mom’s hilariously inappropriate shirts.

If Violet’s son Tommy looked familiar, it’s probably because you’ve seen him as Will Byers in Stranger Things. The actor, Noah Schnapp, is still fairly new to acting but has certainly accomplished a lot for a 16 year old!

Violet Valentine’s two adopted daughters, Danielle and Cooky, are Adam Sandler’s two real life daughters, Sadie and Sunny. They often have cameos in Adam Sandler movies (Hotel Transylvania, Grownups, and Just Go With It, to name a few). His wife, Jackie, also had a minor role in Hubie Halloween.

Ben Stiller has a minor role in Hubie Halloween. He is only shown for a few moments at the beginning as the guard in the mental institute. This is a nod to the very similar role he played in Happy Gilmore (also starring Adam Sandler and Julie Bowen) where he acted as an orderly named Hal L, likely a play on the word “hell.” Same outfit, same name, same mustache – just 24 years apart.

Karan Brar (who played Mike Mundi) and Peyton List (who played a minor character) have been in several TV shows and movies together. The two first starred as siblings in Disney’s show Jessie in 2011. They acted alongside Cameron Boyce, who passed away unexpectedly at a young age in 2019. A slide at the end of Hubie Halloween shows that the movie was dedicated in loving memory to Cameron. 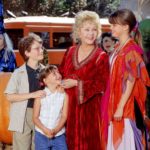 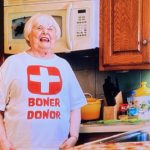