The latest movie in the American Pie series features 4 high school girls who all find themselves trying to fulfill a pact by going after the same guy. Of course, as in all American Pie movies, drama ensues, and there are laughs and cries and fights and ultimately happiness! As silly as this movie is, it’s actually got a fantastic cast of good and believable actors. So if you’re in the mood for a raunchy high school drama, grab a drink and enjoy this American Pie Girls’ Rules drinking game!

Also: Don’t forget to check out the drinking game for the original American Pie movie!

Pay your respects by finishing your drink for the RBG reference!

This is the 9th American Pie movie to come out. It’s shockingly not bad.

This version of American Pie features a Stifler, but for the first time it’s a female Stifler! Is she Steve Stifler’s daughter? Sister? Neice? Unsure. She’s got the same aggressive energy as Stiflers shown in previous American Pie movies, but with a lot more character development.

This is the first American Pie movie to have neither an unrated version nor male nudity. Guess they decided to keep it a bit more “chaste” for once!

Sadly this is also the first American Pie movie to not have Eugene Levy in it. Maybe he was too busy with Schitt’s Creek (which we can totally forgive him for because that show is amazing). 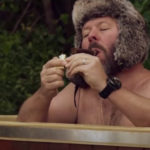