We all know and love Rubeus Hagrid: Keeper of Keys and Grounds at Hogwarts, lover of strange magical creatures, and fierce supporter of Harry, Ron, and Hermione. With half of his genes coming from a giant, this is no small man. In the books he is said to be almost 12 feet tall, and in the movies he appears around 8 feet tall. There are certainly no 8-foot-tall actors in Great Britain, so how did they make Hagrid so tall?

Robbie Coltrane is the actor who played Hagrid in all 8 Harry Potter movies. As he unfortunately does not have magical giant genes, he measures only 6-feet 1-inch tall, a good 2 feet shorter than Hagrid appears. While Coltrane makes an amazing Hagrid (he was the only one ever considered by J.K. Rowling for the part), they had to come up with some clever ways to make him look much taller than he actually was.

Enjoy your favorite drink and show your love for Harry Potter with this set of Harry Potter Stemless Wine Glasses! An ideal kitchen gift for any Harry Potter fan and wine lover, this set of 4 glasses adds a magical touch to any dinner party.

Check 'em out now
We may earn a commission if you click this link and make a purchase, at absolutely no additional cost to you.

Did you know they created TWO huts for Hagrid? One was made large so “normal” sized people would look small in it. The other was made much smaller in order to make Hagrid look like a giant. They filmed with both and then cut scenes together. Additionally, the objects that Hagrid used (silverware and cups, for example) were smaller than average so that they made Hagrid’s hands look large in comparison.

Martin Bayfield, a 6-foot 10-inch tall former rugby player, secretly appears in several shots in Harry Potter. But you would never know it. Donning a fatsuit, Hagrid’s iconic overcoat, and even an animatronic head that looks like Robbie Coltrane’s face, Bayfield plays Hagrid in far-away shots and full-body shots where Hagrid needed to clearly be larger than everyone and everything around him.

This video shows the process of Bayfield getting ready to play Hagrid. Because he had to wear the padded outfit for long hours, the designers fitted it with tubes of water to keep him cool. And that Hagrid mask – it sure fooled us! No wonder nobody ever noticed he had a stunt double in the movies.

Forced perspective is a filming technique that makes people or objects look larger or smaller than they actually are. It works by having a close object and farther object equally in focus so that they appear to be near each other in the same plane.

These images, taken by Danielle from Wanderlust on a Budget while on a Harry Potter studio tour, illustrate this concept well. You can really see how the forced perspective worked within Hagrid’s hut! Hagrid would of course be the one closest to the camera, making any guests look smaller by comparison.

Another slightly less technical way they achieved forced perspective was simply by lowering the camera and filming upwards. Other characters were filmed straight on, but when showing Hagrid, they often filmed him from a lower vantage point. Using this angle, it makes us (the viewer) feel as though we’re looking up at a very tall Hagrid.

Another method used to make Hagrid look so big was to film him in front of a green screen. They could then take footage of just his body and superimpose it into other scenes – but scaled up, of course, to look larger. The green screen came in handy when Hagrid was shown in close proximity to other characters, a time when neither forced perspective nor a stunt double would do the trick.

There you have it – the secrets of how they made a regular human look like a giant!

If you want to see more behind-the-scenes tricks, the Harry Potter DVDs actually have some really great bonus content. And yes, that may sound old school, but just remember that Harry Potter doesn’t stream on any platform! Having a snazzy box collection is one way to ensure you’ve got HP and his pals at your fingertips any time you want to watch.

Watch Harry Potter any time - all the time! This DVD box set contains all 8 Harry Potter films as well as great bonus features. Buy Now
We may earn a commission if you click this link and make a purchase, at absolutely no additional cost to you.
Harry Potter 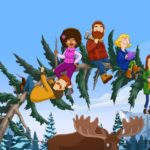 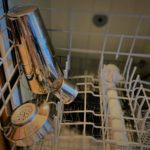 Harry Potter and the Prisoner of Azkaban Drinking Game